In September 2011, I came across the news article of a giant crocodile caught in the Philippines, the biggest ever caught and captured alive.

And the National Geographic Magazine site even had a feature on it: 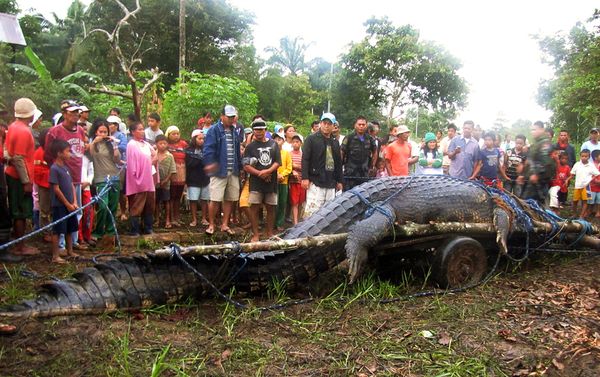 And suddenly the “recollections” about Tan Anoy and Tana Bibing seemed a bit more credible.   Could these be the descendants of Maêocong and Pingang Nonay, the famous crocodile couple that killed Mariano and Maria Feliciano centuries ago?

With renewed interest, I went searching on the internet for the river, for the names of the pair of crocodiles … why hadn’t I done this before?  And before long, I found this.

” For a time, the settlers tolerated their fear . They lived their lives by the Jal-o with that ominous awareness that they were not the masters of the river.  But such fears had hounded them even in their dreams.  Then came the news that a prominent couples from the poblacion was attacked by the dreaded creatures while on their way home from Batang.  “Si Alo Feliciano hay ilo eot a! Si Alo Feliciano hay ilo eot a!”  (Carlos Feliciano is now orphan!) came the report.

Alo Feliciano was the eldest son of Mariano and Maria Bebing Feliciano, Capitan of the poblacion of the newly established pueblo of Balete (the 33rd in the Provincia de Capiz).   His father was tasked to collect taxes from among the landowners (leaseholders) and remit the same to the authorities in Batang once in a month.  The Jal-o was the most convenient route as horseback riding through the Cabugao trail was punishing.  The occasion was grabbed as opportunity by his mother to buy household provisions which were seldom sold in Balete.  On their way home as their baroto passed along the Anao swamps, a couple of crocodiles attacked their wooden craft.  That fateful incident had caused their lives.

Yet, it made the villagers confront their fear and take the bull by its horn–in this case–to take Maeocong and Pingan Nonay by their tails. The death of their Capitan and his wife had awaken in the Baleten-ons their innate courage to do something. Organizing themselves into teams, they hunt down the notorious couples right in their abode, cut down their heads and displayed it for weeks in front of the public market. “Bukon eon it hari si Maeocong sa Jae-o! Bukon eon it siga ro buaya sa Balete!”  (Maeocong is no longer chieftain of the Jal-o!  The crocodile is no longer the Lord of Balete!) , thus proclaimed by the Baleten-ons.”

This was from a blog, By the Jal-o River.   Was this true, then?  Urban legend?  More recollections?  If I went to Balete, would I see some marker in the public market, or whatever it is now?

I had to know more, and contacted the author of the blog for more information.